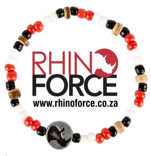 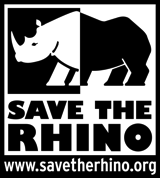 Images from Top to Bottom:
The original, bespoke RHINO FORCE beaded bracelet continues to raise funds for Save the Rhino International (SRI), in the UK, and create employment in previously disadvantaged communities. The Bead Coalition (Pty) Ltd have contracted a group of beaders from the Madikwe Rural Development Programme (MRDP) in the Marico region of North West Province, to make the best-selling cause-related bracelets.

At the current level of production, the women earn in excess of their husbands. Colin Cooper, Chairman of the MRDP says, “In the Marico area there is no work and virtually no new business, so this is an excellent opportunity for our beaders to earn a real income and to showcase their skills.”

Says CEO, Joanne Lapin Thorpe, “The RHINO FORCE beaded bracelet was created to raise awareness and funding for rhino conservation, however I am delighted that  demand has reached a level where significant local employment is created, and this is the plan going forward.”

SRI is a renowned rhino conservation organisation that works to conserve all five species of rhinos in Africa and Asia. Deputy Director, SRI, Susie Offord says, “The RHINO FORCE bracelets have been a huge success in South Africa already. Partnering with RHINO FORCE on an international level is a win-win relationship for SRI as the bracelets help to raise awareness about the plight of rhinos in Africa and in Asia, whilst raising much-needed funds for rhino conservation.”

RHINO FORCE is an initiative of The Bead Coalition (Pty) Ltd, a commercial, cause-related organisation. The original and best-selling bracelet, launched in June 2011, is synonymous with rhino conservation, having facilitated and raised over R4.6 million to date. Recently, the bracelet company facilitated funds for a translocation of six white rhino from South Africa to Botswana – a safe haven in terms of security and monitoring. Mitsubishi Motors SA, proudly sponsors a branded 2013 double cab Triton 3.2 diesel bakkie, used as a mobile billboard in the Johannesburg area.

To support, buy a RHINO FORCE bracelet online at www.rhinoforce.co.za for R40. They will post anywhere in the world.

RHINO FORCE is a dynamic brand that creates international awareness and raises substantial funding for rhino conservation, through the sale of RHINO FORCE beaded bracelets. RHINO FORCE creates philanthropy through commerce. Through the design, development and activation of multiple retail, corporate and electronic market platforms, RHINO FORCE successfully achieves its mission –  ‘Conservation through Commerce’, commercially known as ‘Save the Rhino…Buy a Bracelet’.

About Save the Rhino International

Save the Rhino International works to conserve viable populations of critically endangered rhinos in Africa and Asia. By funding field projects and through education, its goal is to deliver material, long-lasting and widespread benefits to rhinos and other endangered species, ecosystems and to the people living in these areas. It aims to increase the number of rhinos in genetically viable populations in the wild; enhance the integrity of ecosystems and to ensure that local communities benefit from conservation activities.

Mitsubishi has a proud South African heritage which spans back over 75 years. The South African product range has been specially suited to this country’s unique conditions and lifestyle and offer vehicles for the serious off roader, the urban family, the small businessman, the outdoor sportsman and the image-conscious young roader. Mitsubishi customers enjoy the benefit of a nationwide dealer network, a dedicated, knowledgeable and enthusiastic sales teams, highly professional service centres, finance and insurance packages, tailor-made to suit every need.