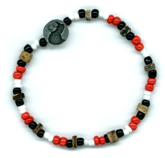 RHINO FORCE facilitated a R1.1 million donation to Africa Foundation to carry out the first ever private game reserve donation of rhino to another country.   &Beyond  moved six white rhino from South Africa to Botswana’s Okavango Delta in March 2013. This conservation coup has been generously funded by corporate donors including Motorite Administrators.  In addition, proceeds from sale of RHINO FORCE bracelets support Africa Foundation (&Beyond’s social development partner) and are earmarked for projects focused on rhino conservation. In just three months, R325,000 has been raised.

The black, red and white beaded bracelets, already synonymous with rhino conservation, are sold in several retailers in South Africa and internationally through an e-commerce site www.rhinoforce.co.za.

In 2012 alone, South Africa lost a devastating 668 rhino to illegal poaching, which is a 49% increase from the previous year’s figure of 448. Botswana has an excellent security system in place to protect these animals and will be a safe haven for the six relocated rhino. Translocations are a proven method of securing the survival of an endangered species.

After years of negotiation and planning, the translocation process is almost complete as the six rhino arrived safely. Game scouts from Botswana have undergone intensive tracking and monitoring training by &Beyond. The movement and behaviour of the herd will be closely monitored using satellite collars and telemetry and tracking equipment. A portion of this equipment as well as anti-poaching uniforms and binoculars has been generously supplied by the Chipembere Rhino Foundation.

“It’s the ideal opportunity for us to move our eggs out of one basket,” explains &Beyond Conservation Manager, Les Carlisle. “The project has the full support of the Botswana Rhino Management Committee and we are thrilled to be driving such a vital initiative for rhino conservation in partnership with Motorite and RHINO FORCE.”

Chris Thorpe, Founder of RHINO FORCE says, “We are pleased to know that all the funds we donate or facilitate go directly to translocation, which is an effective way to counteract poaching.  We also believe it’s important to involve and educate the communities in this fight, and Africa Foundation does this well.”

As one of southern Africa’s largest independent motor-related insurance administrators, Motorite supports this translocation to ensure the ongoing conservation of South Africa and Botswana’s natural heritage. To demonstrate another example of the motor industry getting behind rhino conservation, Mitsubishi generously sponsored a brand new Triton diesel double cab for RHINO FORCE to use as a mobile billboard at events, meetings and deliveries.

For the Love of Rhinos, buy and wear your bracelet. Visit www.rhinoforce.co.za to purchase online.

Motorite is the largest independent motor-related insurance administrator in southern Africa. Leaders in the administration and sales of warranty, maintenance and service plan products to the entire motor industry, Motorite offers unsurpassed levels of service and peace of motoring to its extensive customer base. Motorite places huge emphasis on uplifting the working and social environment of its community. By sponsoring &Beyond’s rhino translocation project, Motorite is playing an important role in ensuring the ongoing conservation of South Africa and Botswana’s natural heritage for future generations to come.